This is a text widget, which allows you to add text or HTML to your sidebar. You can use them to display text, links, images, HTML, or a combination of these. Edit them in the Widget section of the Customizer.
Posted on December 14, 2017December 16, 2017 by Laura Three Names 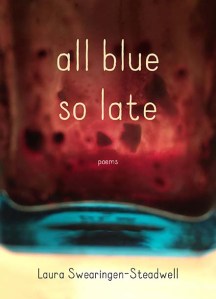 My second collection of poems, All Blue So Late, is finally officially released! I have a cache of copies to sell myself; buying directly from me is the best way to support me as an artist, so please hit me up if you’re interested. I can inscribe whatever you like, of course! The next best ways to ensure your money is going towards good are: getting copies from my phenomenal press, or from your local bookstore (a good bookstore will order the book for you if they don’t already have it). If you must Amazon, do what you must. You’re reading my work, that’s awesome, no matter how it happens.

If you’re interested in reviewing the book, or if you’re a teacher and would like a desk copy, just ask. I see being reviewed and being taught as very high honors.

The other night, I watched Ghost Dog: The Way of the Samurai for the first time in maybe a decade, partly to discover if it’s still my favorite movie. It is–as much as I play favorites anymore. It’s in that rarefied space. Specially resonant.

When I first discovered the movies, I was in awe to find the protagonist reading Hagakure: The Book of the Samurai, which my friend Mikiya had just put in my hands. It was the middle of college, and during those years, it was one of very few books I was able to read for pleasure. I loved it. The philosophy. The morbidity, elegance, eloquence, eccentricity. I still love it. Central to the philosophy is meditating on all the different ways one might perish. That the true warrior ought always be prepared for any possible death. [I adapted that concept for my own use, to combat the stage fright that comes upon me before almost any performance: I visualize all the possible ways I might fail before I go onstage: tripping on the stairs and falling flat on my face; farting in the middle of a poem; no one laughing at a joke I’m sure is funny; and so on. Every version, of course, ends with me surviving (ironic), so that perspective helps quell my anxiety.]

The character Ghost Dog is an assassin, so he has good reason to be obsessed with said book, but how wonderfully synchronous that I was then obsessed with it as well! Plus, Ghost Dog is black! He’s a black nerd. Zen. Very present. His best friend speaks (only?) French, and sells delicious ice cream. And he’s black, too! At that point, this was one of the only movies I’d ever seen to show idiosyncratic black characters. It only helped that Jim Jarmusch made it, since he was (is) one of my favorite directors. Over everything, what’s beautiful about the film? Long, slow, shots. The gradual movement of it. How it sculpts time. And mood. How it always makes me feel.

As I watched it, I found myself wondering, Why do I need this film now? By returning to this old haunt, what solace was I seeking?

I was fired a few days ago, after two weeks working a desk job in Long Island. After six months of unemployment. Granted, one of those months was spent at a residency I was chosen for, and most of those months I was putting finishing touches on the book. Still, after a year and a half of stability, I had returned, once again, to the tightened belt, the neediness, that taut, desperate place so many artists know so well. Where our art alone doesn’t pay the bills, and we’re constantly on the hunt for some, any opportunity.

I was fired after two weeks, although I’d been promised a position that would last at least six. Why? It was “a bad fit.” How so? It was not a position for a (black female?) person who questions. The disappointment pierced me, unexpectedly. During my phone interview, and in-person interview, I expected a good man for a boss. That was the show he put on. But he was not that, to me. I can work any job in the world as long as I have a good boss as part of the environment. If I love and respect my boss, I can and will do just about anything. Devotion be my motor.

My first boss ever set the bar high. Jacqui was (is) my mom’s friend, brilliant, with a ferocious sense of humor, and a keen eye for justice. She’s also a black woman. She was the first black woman I knew as an elder, outside my father’s side of the family. In fact, Jacqui is the only black woman I’ve ever gotten to work for–and I’ve held a lot of jobs over the last twenty years. That’s not inherently a win, of course, but Jacqui was generous and kind. She helped me so much. She asked a lot about my family situation, which was almost unbearable at that point. [My family argued constantly, LOUDLY. My father’s temper was (is) explosive, as was (is) my older sister’s. Three of us were teenagers, all of powerful, stubborn will. I felt bullied by my older sister and father, smothered by my mom, tragically misunderstood by everyone. It was a hard time for everyone in the family, a time I’m so grateful we managed to grow beyond…] Jacqui suggested I write satire or cartoons about my family members to excoriate them in private, a means of managing and transforming my emotions. Jacqui talked to me a lot about feelings. I badly needed that as a teenager. From an adult who spoke to me without judgment or condescension, who seemed to truly understand that I was an artist. She gave me a book all about tears, crying/weeping/sobbing and so on, which completely changed how I thought about emotion as interaction. Jacqui was (is) a beautiful, beautiful mentor. For her, I entered data, plugging numbers into spreadsheets for hours, contentedly–but I would have done anything she asked.

Ghost Dog’s devotion belongs to a flawed master. He is only a man, but he owns another man’s life. Work is so intimate. Those of us who work full-time spend more hours at work than anywhere else, so the environment colors a person’s entire life. And since we live in a society with no true safety net, those of us who must earn money are utterly dependent on the boss. Mostly I’ve worked for small, independent businesses, which has helped me to have more humane work environments overall, but the relationship with the boss is what matters most.

How does a person like me find a good person to work for, in a world like this, a city like this, in times like these? Good people don’t, foremost, pursue profit and position. A lot of the good people I know get chewed up or tossed aside by capitalism on a regular basis. The artists I love don’t create primarily for profit. My philosophy runs contrary to capitalism, so my writing does, too–but I need to sell it. I need to “make a living,” or else I cannot make a life. And there, my friends, is the goddamn rub.